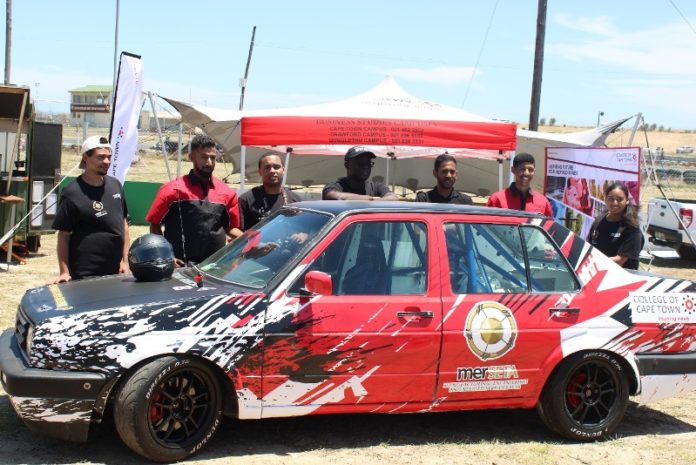 The car was modified and re-built by the college’s Automotive Motor Mechanics Learners Apprenticeship Group, under the Young Engineers Motor Development Programme. The launch coincided with the annual Killarney International Raceway Motor Show, during which hundreds of exhibitors and car enthusiasts show off their vehicles.

The College of Cape Town’s race car stole the show and was the talk of the day.

To many of the learners this was just a pipe dream, until MerSETA “the champion SETA” committed to fund the Young Engineers Motor Development Programme. The project officially got off the ground early last year, 2019, in April. Elbows were greased, and the team of apprentice started setting the wheels in motion. The team invested so much time and effort into constructing and modifying a racing car from scratch, using all the knowledge gained in the classroom and workshop.

It was a busy and rewarding year for Senior lecturer Mr. Mogotsi Reuben Mokotedi and learners who worked hand in glove with other stakeholders that assisted them throughout the different phases of the exciting project. “The journery was long and hard, can’t wait to do it all over again. The determination and commitment demonstrated by the learners were remarkeble,” said Mr Mokotedi.

The aim of this project was to create exposure and opportunities for learners to gain valuable experience in the motor racing sector, through the assembling of a GTI Challenge Club formula racing vehicle which include working and learning as part of a motor racing support and mechanical team. This initiative is also aimed at redirecting young people away from illegal street racing and introducing them to professional racing, in a controlled and safe environment.

The venture is educational at the core, as it gives the learners an opportunity to practice their Engineering Theoretical Training, including Physics, Materials Science, Mathematics, Aerodynamics Computer Science and in particular, the Automotive Repair and Maintenance Training. One race car is the product of a various scientific and engineering disciplines.

The contribution of the learners does not end with the complete construction of the car, but as a team they will continue to race, service and maintain the vehicle according to the GTI Challenge Rules and Regulations. Killarney International Raceway has introduced a Driver’s Development Academy for young drivers to nurture their driving skills and expertise, which the learners will be part of.

There is great interest in motor sport amongst the youth, in particular those who have an interest in automobiles, and they are the ideal target market for the College. Most of the students at the Athlone campus are already involved in some form of racing. The campus has used numerous racing occasions as a marketing initiative and has built a sound relationship with the Killarney International Raceway. The college has also been exploring other initiatives to strengthen the association, and the race car will serve as an astounding marketing tool for the college.

Entry into the GTi Challenge Club formula racing will be at Class C, with progression up the classes as the team and driver(s) develop. Student progression will be based on the placement, or employability into other racing teams in different classes, or any other sphere within racing where their experience will be acknowledged, for further development and growth within the sector.

Furthermore, GTi Challenge is about friendships, family and camaraderie. On the track it is every driver for him/her self but off the track great friendships have been formed. It’s about helping a fellow driver work on his car or lending him parts to get his car fixed for the next race of the day, and this type of environment is ideal for student development and learning.

Students get an opportunity to learn from other teams in different classes within the challenge and can even get absorbed as team members, consequently enhancing our main objective for the project, experience, exposure and opportunities.