The Northern Cape Department of Economic Development and Tourism, in conjunction with the national Department of Trade and Industry (the dti), is in the process of finalising submission documents for the declaration of a Namakwa Special Economic Zone.

The planned Namakwa Special Economic Zone to be established in the Aggeneys region of the Namakwa District of the Northern Cape Province will have a transformative effect on the local, regional, provincial and national economies.

The anchor investor of the SEZ will be Vedanta Zinc International, which is already running the Gamsberg Zinc Mine and intends to build a smelter for the treatment of zinc concentrate.

The SEZ would advance the aims of developing infrastructure, accelerating skills development and empowerment, and consolidating economic development in the Northern Cape.

At the official launch of the Vedanta Gamsberg Zinc Mine, President Cyril Ramaphosa suggested that the mine complex could be the core and catalyst for economic development for the region through the establishment of a SEZ. He specifically called for more beneficiation of South Africa’s minerals to take place in South Africa.

Vedanta Zinc International started exporting product from the mine in 2018 and has so far invested about $400-million in the project. The company is considering the construction of a smelter; together, these facilities would form the base of the SEZ.

Investors in related downstream activities such as fertiliser, explosives, paints and sulphuric acid would use product from the mine and the smelter. Further opportunities in renewable energy, transportation, storage and construction would naturally flow from the primary activities.

Aggeneys is in the Khai-Ma Local Municipality within the Namakwa District Municipality of the Northern Cape Province. Aggeneys is 66 km from Pofadder (headquarters of the local municipality) and 110 km from Springbok, where the office of the district municipality is located. All three towns are on the N14, the national road that links Springbok with Pretoria.

The proposed Namakwa SEZ is strategically located along a bulk commodity corridor, which runs from a planned port on the Atlantic coast (the Boegoebaai Deep Port Harbour) through Aggeneys to the large urban centre of Upington and beyond to the concentrations of iron ore and manganese ore at Sishen and Kathu. Upington Airport is capable of handling large aircraft.

The railway line that currently transports ore from Sishen to the coast at Saldanha is one of the engineering marvels of the world, moving 40-million tons every year along an 861 km route.

The value proposition of the Namakwa SEZ is based on the existence of the Vedanta Gamsberg Zinc Mine and the proposed building of a smelter by Vedanta Zinc International. These would be the anchor tenants of the SEZ.

In 2010 Vedanta Resources acquired Black Mountain Mining (Pty) Ltd from Anglo American. Black Mountain Mining (Pty) Ltd, part of Vedanta Zinc International, owns and operates the Gamsberg Zinc Mine. By 2014 environmental authorisation had been granted to Vedanta, together with a waste management and water-use licence. Development work began in June 2016 and the mine is currently mining four-million tons per annum and producing up to 250 000/tpa of zinc metal in concentrate for export.

The construction of the concentrator plant began in 2017 with the official opening in February 2019. Phase 1 is complete, and planning work for the commencement of  Phase 2 is currently underway.

The full process would involve the treatment of 680 000/tpa of zinc concentrate to produce 300 000/tpa of high-grade zinc ingots for export. As a by-product 450 000/tpa of 98.5% pure sulphuric acid will be produced for both export and consumption within South Africa*.

* This information is taken from the Draft Scoping Report, Non-Technical Summary, prepared by SLR Consulting, January 2020.

Various types of infrastructure will be needed to support the smelter, including: 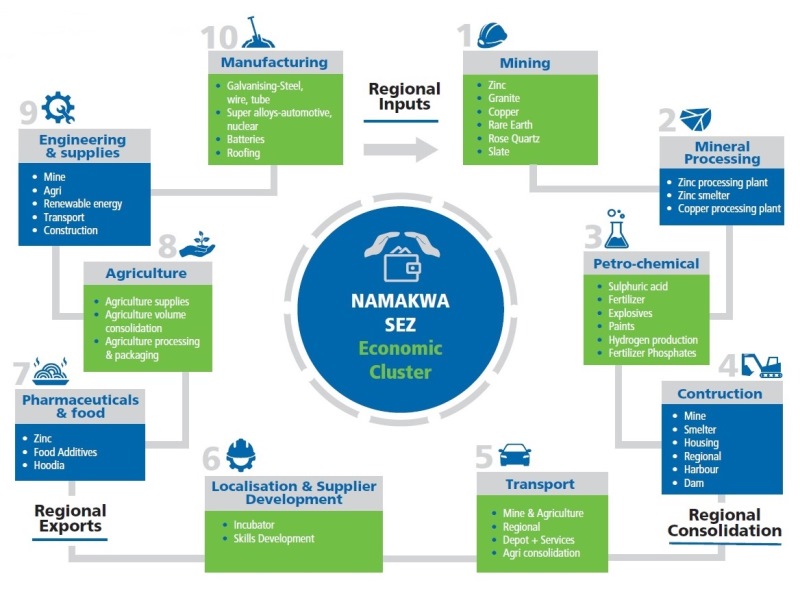 In 2018 alone, Vedanta spent R44-million on skills development, health, enterprise development and municipal infrastructure support, with a further R77.5-million spent with local businesses. In the period 2014 – 2019, Vedanta invested over R77-million on a range of CSR programs, and over R88-million on various training initiatives.

Gamsberg is considered one of the most digitally advanced mines in South Africa, which will give impetus to the provincial ICT sector.