Although the bulk of agricultural activity occurs through large commercial enterprises, there are moves to broaden the sector’s reach and to diversify it. In 2019/20, 744 gardens were established by the provincial government to encourage households to produce their own food and to promote nutritious diets. Garden and poultry packs are regularly distributed to further encourage this trend and to support food security in communities where unemployment is high.

Two-year mentoring and training programmes are available for young people interested in taking up farming. At the moment, 80 young graduates are employed on farms or in agro-processing firms and will develop skills in many aspects of the agricultural value chain which will stand them in good stead for a future in the sector.

A programme to empower black farmers supported six farmers in 2020. The Commercialisation of Black Producers Programme targets farming and agro-processing in the expectation that graduates will mentor young people and create employment.

The commercialisation of the goat project which was successfully extended to Namibia has now been further expanded to include Botswana. Small-scale farmers are being given access to market and further expansion is expected.

Long-term thinking underpins the adoption by the provincial government of the Northern Cape Climate Change Adaptation Response Strategy. This allows for a framework to tackle drought and other climate change issues.

Occupying 36-million hectares, the Northern Cape is the largest province in the country, almost a third of South Africa’s total land area. Although the province is a predominantly semi-arid region, agriculture is a major component of the economy of the regional economy and the province’s farmers contribute 6.8% to South African agriculture.

Agriculture contributes about R6.8-billion towards the Northern Cape’s provincial GDP of R96-billion. The agricultural sector also plays a vital role in the broader economy of the Northern Cape, employing as it does about 45 000 people. This represents about 16% of employment, a much higher figure than the national figure of 5.5%.

Agricultural development takes place along defined corridors within the province. In the Orange River Valley, especially at Upington, Kakamas and Keimoes, grapes and fruit are cultivated intensively. High-value horticultural products such as table grapes, sultanas and wine grapes, dates, nuts, cotton, fodder and cereal crops are grown along the Orange River.

Wheat, fruit, groundnuts, maize and cotton are grown in the Vaalharts Irrigation Scheme in the vicinity of Hartswater and Jan Kempdorp. The Vaalharts Irrigation Scheme is one of the biggest systems of its kind in the world. Ranging over more than 30 000ha, it has transformed a semi-desert zone into a productive area that sustains cotton, wheat, maize, lucerne, citrus, peanuts, fruit, grapes, olives and pecan nuts.

Vegetables and cereal crops are farmed at the confluence of the Vaal River and the Orange River in the vicinity of Douglas. Of the nearly 40-million 10kg bags of onions produced in South Africa (outside of linked production chains set up by supermarkets), about 10-million 10kg bags come from the Northern Cape.

Wool, mohair, karakul, Karoo lamb, venison, ostrich meat and leather are farmed throughout most of the province. The province is second only to the Eastern Cape in terms of the number of sheep farmed and it is the fourth-largest wool-producing province based on annual sale of producer lots. The Beefmaster abattoir in Kimberley is one of three abattoirs in South Africa to export frozen beef to China. The company processes and packages about 30 000 tons at the abattoir.

Rooibos has not yet made a big dent in the 200 000 tons of tea consumed by Japan every year, but sales grew 7% in 2018 and introducing a new variety to a country of tea aficionados is easier than tackling a nation of coffee drinkers. A total of 2 000 tons were shipped to Japan from South Africa in 2018.

Rooibos is competing in the “Healthy Tea” segment and a popular restaurant chain’s decision to use the tea as a complement to its pork bone broth has helped to promote the product. Brazil is being explored as a potential market.

Recent studies proving that rooibos tea increases antioxidant capacity in human blood are further proof of the beverage’s healthy qualities. The unique climate and soil of the western part of the province support this niche crop. About 6 000 tons of tea is exported to more than 30 countries and domestic consumption is about 8 000 tons. The South African Rooibos Council states that more than 5 000 people are employed in the rooibos industry.

Another niche product of the Northern Cape is karakul pelt, which is a speciality of the Gordonia district of Upington. This exclusive product is distributed via the capital of Denmark and the Italian fashion capital of Milan. Copenhagen is the site of the two auctions of karakul pelts that are held annually, karakul being a speciality of the Upington district. Agri-company KLK is the only organisation that handles these pelts in South Africa. Glove-makers in Milan are among the international clients to whom farmers of the dorper sheep breed sell the wrinkle-free skins of their sheep, at good prices.

Horse-stud breeding provides yet another exclusive niche. This is a speciality of the area around Colesberg, where the cold evenings and warm days combine to drive out disease and promote strong growth. Among the studs are Henham and Southford, a 900 ha property near the Gariep Dam which once was home to the famous stallion ”Damask”.

Compared to other types of manufacturing, agro-processing can be scaled up relatively quickly with good financial rewards. It can also be labour-intensive. As such, agro-processing is a key plank in the growth plans of the Northern Cape.

Work has already been done in providing manufacturing facilities for rooibos at Niewoudtville and investments have been made in fisheries and a new vineyard development for groups of people who previously had not had exposure to the grape and wine sector.

The Northern Cape Department of Agriculture, Environmental Affairs, Rural Development and Land Reform was behind the rooibos tea factory, which now trades as Bokkeveld Rooibos. The factory takes tea from 85 local farmers with the goal of helping to integrate these farmers into the agricultural and agro-processing business chain. 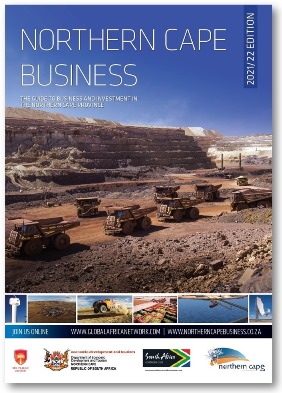 Two areas of interest to assist small-scale farmers are being explored with regard to hemp and crops that can produce liquor. The dry interior of the Northern Cape is suitable for the growing of Agave that provides the source material for tequila and there are several other opportunities. The rapidly changing legislative environment for hemp and marijuana holds potential in textiles and medicine.

KLK is based in Upington and does much more than karakul pelts. The company’s interests include 19 retail outlets, 12 petrol stations, four Build it franchises and a strong auction division.

KLK runs three abattoirs in Calvinia, Carnarvon and Upington that slaughter lamb and beef carcasses. SA Dorper manages the production and export of dorper skins and the production of cattle hides. GWK is another company with its headquarters in the Northern Cape, in this case the town of Douglas.

Senwes is one of the country’s biggest agri-companies and its Northern Cape area of operation is mostly around the Vaalharts irrigation area, which is close to its headquarters just over the provincial border in North West, at Klerksdorp. Storage and handling of grains and oilseeds are the speciality of Senwes.

OVK controls the large Gariep abattoir at Strydenburg, which has a daily capacity of 1300 sheep, 100 cattle and either 250 ostriches or 750 small game animals. OVK also has trade branches, vehicle dealerships, a finance division and manufacturing facilities for maize meal and wheat meal. Kaap Agri, a Western Cape company, has a significant presence in the Northern Cape and Namibia.