Getting more value for the minerals and agricultural crops that are extracted from the soil of Limpopo is a major goal of economic planners. A key component of the strategy to boost the value of the region’s products through manufacturing is to develop Special Economic Zones (SEZs) and industrial parks.

Described as “major catalytic projects”, the Musina-Makhado SEZ (approved and forging ahead), the Tubatse SEZ (proposed) and several industrial parks (either being revived or established) are central to the strategy to grow Limpopo’s manufacturing capacity.

As of February 2020, Shaanxi CEI Investment Holdings had committed to a $5-billion investment in a vanadium and titanium smelter project at the Musina-Makhado SEZ (MMSEZ) and a further $1.1-billion had been pledged from other sources.

The focus of the first phase of the SEZ is on energy and metallurgical processes but agri-processing, logistics and general manufacturing are expected to follow in short order. An investment conference targeting the northern side of the SEZ was held in November 2019 and a South African company has announced it will manufacture products in the electric vehicle field, new energy solar system products, energy storage systems and high-density polyethylene water pipes.

Most of the planning for both sections of the SEZ is complete and the Environmental Impact Assessments (EIA) are nearly finished. Projections for employment opportunities at the MMSEZ have been revised upwards to 26 000.

Plans for the proposed Tubatse SEZ have been amended and were to be submitted to national government in the course of 2020 (at time of the original article publication – read more). The SEZ in Tubatse will focus on the beneficiation of platinum group metals (PGM) and mining-related manufacturing. Phase one of the project would see a 280 ha site developed to accommodate a mining suppliers park, light manufacturing, heavy manufacturing, logistics, a solar energy cluster and a PGM beneficiation cluster.

A good example of an attempt to derive greater benefit from an agricultural product is the plan to create a Marula Industrial Park. The Marula Industrial Hub envisaged for the Phalaborwa area will provide a platform to further exploit the tasty marula fruit, which has a high vitamin C content and is already produced as a beer and a liqueur. The Limpopo Department of Economic Development and Tourism (LEDET) is encouraging research into the uses of marula and the development of commercial products such as cosmetics and jams. The University of Limpopo is making good progress with a marula wine.

Facilities at the hub will include a centre for research and processing facilities to create more value from the raw product. Advisors will be available to help small-scale farmers and SMMEs enter the formal economy.

The Marula initiative is consistent with the broader agricultural sector plans for Limpopo. The provincial government has identified five Agricultural Development Zones (ADZs) across the province, including the Mopani District within which the Marula Hub is located. Programmes to increase productivity have been presented to small-scale farmers. Small-scale producers are receiving support in the form of irrigation infrastructure, livestock infrastructure and other production inputs.

The University of Venda has its own commercial offshoot, the Univen Innovative Growth Company (UIGC) which is solely owned by the university. Services are offered to the public by a range of consultants and trainers via five programmes, including the Animal Production Programme, the Farm Equipment Programme, the Univen Commercial Unit and the Univen Consultancy Unit.

The SEZ and industrial parks being promoted in the province are conceptualised within a broader framework. The Limpopo Development Plan (LDP) targets three broad areas for improvement and development: socio-economic, infrastructural and institutional. Every department of the Limpopo Provincial Government has targets within the LDP which are translated into actionable programmes to be implemented within time-frames.

The plan is supported by strategies relating to a spatial investment framework in public and private sector infrastructure, an integrated public transport policy and policies on land development.

Key elements of the Limpopo Development Plan are: industrialisation (beneficiation of mining and agricultural products and produce); mining (local suppliers, improved training and access to sector for entrepreneurs); infrastructure development; agri-processing; SMME promotion and ICT and the knowledge economy (establish a WAN footprint). 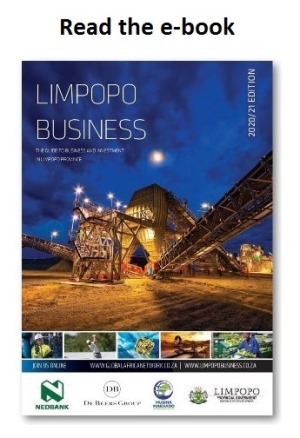 The Limpopo Economic Development Agency (LEDA) is the key driver of the provincial government’s drive to boost the economy through investment. LEDA is an agency of LEDET. LEDA’s brief is to contribute to accelerated industrialisation in Limpopo by stimulating and diversifying the industrial base of the regional economy. The focus is on high-impact projects that will spark growth in a variety of sectors and create employment opportunities.

Mining is currently the most important part of the provincial economy. Recent platinum mining developments on the eastern limb of the Bushveld Complex have increased this effect but global commodity prices have been uncertain in recent years.

One of the goals of the LDP is to see more beneficiation from the mining sector, which will support the goal of further industrialising the province’s economy. Related to this is an emphasis on the goal of developing manufacturing capacity, and this is where the role of SEZs is so important.